Dr. Mondal has published his original research conclusions in over 36 peer-reviewed publications, including 26 journal publications (21 as first authored and 7 as senior/corresponding author) and 10 conference proceedings and abstracts. These publications have been cited over 160 times by researchers from all over the world. Dr. Mondal has published his research in high-impact, international peer-reviewed journals and presented his research at major international conferences throughout the United States, Canada France and India. His journal articles are consistently and repeatedly cited for their original findings. His papers have been cited extensively including a publication entitled “Micronucleus formation, DNA damage and repair in premenopausal women chronically exposed to high level of indoor air pollution from biomass fuel use in rural India” published in the Mutation Research/Genetic Toxicology and Environmental Mutagenesis in 2010 cited over 39 times, “Neutrophilic inflammatory response and oxidative stress in premenopausal women chronically exposed to indoor air pollution from biomass burning” published in Inflammation in 2012 cited over 34 times), “Assessment of DNA damage by comet assay and fast halo assay in buccal epithelial cells of Indian women chronically exposed to biomass smoke” published in International Journal of Hygiene and Environmental Health in 2011 cited over 20 times, “Activation of Protein Kinase B (PKB/Akt) and risk of lung cancer among rural women in India who cook with biomass fuel” published in Toxicology and Applied Pharmacology in 2012 cited over 11 times. In total, Dr. Mondal’s journal publications have been cited over 160 times.
After coming to United States, Dr. Mondal presented his original research at 10 different prestigious national and international conferences in United States, Canada and France.  He also received Travel Fellowship awards in 2014 and 2015 from prestigious Heart Failure Society of America. He has been selected as a finalist of the Jay N. Cohn New Investigator Award in Basic Science at the upcoming Heart Failure Society of America annual meeting. The meeting will be held in National Harbor, Maryland in September 2015. This award is to recognize research excellence in young investigators. HFSA officials explain that a special committee of reviewers picked the top four abstracts submitted in advance of the meeting. Then, the finalists were invited to present their research results in highly profiled scientific sessions during the meeting.
Dr. Mondal has a diverse expertise in different fields of Basic science research including heart failure and biomedical research, air pollution and public health, Drug abuse and child health etc.

Heart failure (HF) affects 5.1 million adult patients in the US.  About 50% of people diagnosed with HF will die within 5 years. Ventricular assist device (VAD) therapy has evolved into a standard therapy for patients with advanced HF, not only as a bridge to myocardial recovery or cardiac transplantation but also as a destination therapy. The recent data suggest that approximately 85 and 75% of patients supported with continuous flow VADs (CF-VADs) will survive at 12 and 24 months, respectively. These survival rates are approaching those of heart transplant patients. However, bleeding has become a significant problem for the CF-VAD therapy. Thus it is critical to understand the bleeding risk of CF-VAD support and their underlying mechanistic origins. Given the potential of the CF-VAD therapy for end-stage HF patients and the need to reduce significant device associated complications we conducted series of clinical, biological and bioengineering experiments to seek a better understanding of hemostatic dysfunction and bleeding in HF patients supported with CF-VADs. We showed that non-physiological high shear stress generated from CF-VADs is responsible for platelet dysfunction and apoptosis leading to bleeding. In particular, shear-induced shedding of key platelet glycoprotein (GP) receptors like GPIbα (vWF receptor), GPVI (collagen receptor) and platelet integrin αIIbβ3 (fibrinogen/vWF receptor) could compromise the ability of platelets to adhere to corresponding substrates as demonstrated in our recent publication (a-e). Platelet apoptosis involves the regulation of function and clearance of circulatory platelets. Evidence of platelet apoptotic events includes depolarization of mitochondrial inner membrane potential and exposure of phosphatidylserine. The change in these markers of platelet apoptosis along with intraplatelet reactive oxygen species generation was significantly associated with bleeding after CF-VAD implantation (f) and these biomarkers were also showed a device specific responses (g). We also showed that, CF-VAD implanted HF patients not only exhibit elevated oxidative stress and DNA damage in blood leukocytes but also have abnormalities in DNA repair pathways (h). These new knowledge can be used by clinicians to refine bleeding risk stratification in patients for the improved quality of life and by engineers to develop less traumatic, next generation biocompatible VADs. Beside bleeding, we also identified several biomarkers of systemic inflammation and infection after CF-VAD implantation and already published recently (i,j).

Biomass fuels are extensively used in rural India for cooking and room heating. Indoor air pollution (IAP) from burning of biomass fuels such as wood, dung and agricultural wastes during cooking is a public health concern in rural India. While staying in India, I studied the respiratory and genotoxic effects of biomass smoke in a group of  pre-menopausal women from rural West Bengal who used to cook exclusively with either biomass (exposed) or cleaner fuel liquefied petroleum gas (LPG, control). Our study demonstrated a multitude of health problems in women of rural West Bengal who were chronically exposed to biomass smoke during daily household cooking. They had higher prevalence of respiratory symptoms, reduced lung function, bronchial hypersensitivity, airway inflammation, oxidative stress, up-regulation of ribosome biogenesis, genomic damage, upregulated DNA repair systems, prolonged cell survival and activation of proto-oncogene Akt with consequent high risk of developing cancers of epithelial cells relative to LPG-using women from similar neighborhood. Majority of my work is documented in 9 publications in peer reviewed journals (a-i) and enabled me to achieve my PhD degree on this topic.  During the last five years, most of my indoor air pollution and women’s health work got more than 125  citations by numerous scientists throughout the world. Below is the list of publications arranged according to citation history. 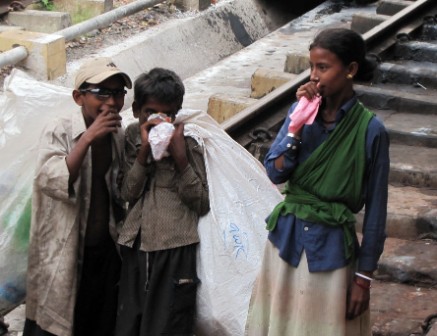 Children are the source of hope and inspiration for the society. That is why they have the right to be brought up in a positive environment. But there are many children in the world who have become synonymous with social deprivation at its worst. Children who are working and living on the streets are found throughout the nation. Street children constitute a marginalized population in most urban centers of the world. However, it is speculated that between 100,000 and 125,000 children live on the streets and railway stations of India’s major cities, and that more than half of them have some form of drug addiction. Most of the paltry sum they earn is spent on tobacco or on tube of Glue (locally known as ‘Dendrite’ which is an industrial contact adhesive and rubber cement brand marketed as glue sticks, tubes and cans in India and South Asia, mainly in Eastern India, Bangladesh and Bhutan) that is a particular favorite with those children. This golden colored industrial glue (often called as ‘golden glue’) containing organic solvents is cheap and readily available and provides faster onset of action and the regular ‘high’. The kids squeeze Glue onto a rag and huff its fumes through the mouth. Our reports suggested that tobacco smoking and/or chewing habit among street boys is associated with increased frequency of micronucleus and γ-H2AX foci formation in oral mucosa, implying chromosomal and DNA damage respectively (a). Additional habit of sniffing/huffing of industrial glue enhances the severity of genotoxic changes in buccal epithelial cells of these children. We also observed marked increase in argyrophilic nuclear organizer region (AgNOR) in buccal epithelial cells of glue-addicted children, suggesting upregulation of ribosome biogenesis in these cells (b). Taken together, these studies indicate genetic changes in oral mucosa of street boys in association with tobacco and glue sniffing or huffing habit. So it is necessary to campaign biosafety and health education programme explaining the adverse health effects of inhalant abuse by the young futures throughout the nation. Thus inhalant abuse intervention programs seem important from the community health perspective also (c).
﻿
a)     Mondal, N.K. (corresponding author), Ghosh, S. & Ray, M.R. (2011). Micronucleus formation and DNA damage in buccal epithelial cells of Indian street boys addicted to gasp ‘Golden glue’. Mutation Research/Genetic Toxicology and Environmental Mutagenesis. 721(2), 178-183.
b)     Mondal, N.K. (corresponding author), Ghosh, S. & Ray, M.R. (2012). Quantitative analysis of AgNOR proteins in buccal epithelial cells of Indian street boys addicted to gasp ‘Golden glue’. Experimental and Toxicologic Pathology. 63(7-8), 677-681.
c)      Mondal, N.K. (corresponding author) (2013). Commercial Glue Sniffing and Child Health: Indian Street Children are at a Risk. Journal of Biosafety & Health Education. 1(3), 1-2.

Back to Home
Powered by